What Is the Will of God? How Can it be Found?

The Sacred Adventure is counted among the richest of gifts in the mystical literature of East and West. Originally written by the ascended master El Morya as letters on the Will of God to his students throughout the world, it is a treasure of timeless Truth for the soul's ascent to God.

The Master's extraordinary devotion to God's Word and Work is a powerful stream that runs throughout his soul's incarnations on earth as he has stood staunch in the role of Advocate, Teacher, and Exemplar before our spirits soaring unto Love.

As the Rajput prince El Morya Khan, he worked closely with Kuthumi, Djwal Kul, Serapis Bey, Saint Germain and others to found the Theosophical Society in 1875. He was Abraham, the ancient patriarch who emerged from Ur of the Chaldees to become the prototype and progenitor of the twelve tribes of Israel. Returning as Melchior, one of the three wise men of the East, he followed the star which portended the birth of the best of his seed who would fulfill all the promises of God unto his spiritual descendents. 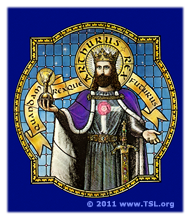 As Arthur, King of the Britons, he summoned knights of the Round Table and ladies of the court of Camelot to quest the Holy Grail and attain through initiation the inner mysteries of Christ. Appearing again on Britain's soil as Thomas Becket as well as Thomas More, both martyred,he twice played the role of defender of the Faith and challenger of King Henry—also twice born and twice oppressor.

In the 16th century, his soul's journey took him to the East in the person of Akbar, greatest of Mogul emperors, and in the 19th century to Ireland to be her poet laureate Thomas Moore. In 1898 the renowned "Mahatma of the Himavat," El Morya Khan, ascended to the heart of God.

During the 1920s and 1930s the Ascended Master El Morya worked with Nicholas and Helena Roerich, who set forth his writings in numerous published works. In 1958 he called Mark L. Prophet to disseminate the teachings of the Ascended Masters as Pearls of Wisdom® published by the newly founded Summit Lighthouse. With Saint Germain and Mother Mary, he also trained Elizabeth Clare Prophet as his Messenger. Bearing the flame of the World Mother and the Banner of Maitreya, she carried on the tradition of the Initiates and the Mystery School at Summit University.

Chohan of the First Ray

In his service to the earth today, El Morya holds the office of Chohan (Lord) of the First Ray of God's Will and Chief of the Darjeeling Council of the Great White Brotherhood. Through Mark and Elizabeth Clare Prophet he delivered the teachings of the Universal Christ for the Aquarian age. The Summit Lighthouse still conducts retreats on practical spiritual techniques for meeting the personal and planetary challenges posed by the prophecies of Saint John's Revelation.

Drawn by our Elder Brother from his illustrious and fruitful journey through the veils of time, The Sacred Adventure will give you the sublime reason for living your life with tender reverence, a fiery determination, and a zest for any fate.

The Sacred Adventure at Bookstores:

Order your copy of the The Sacred Adventure or

Check the The Sacred Adventure table of contents.