El Morya was embodied as Abraham, Hebrew patriarch and progenitor of the twelve tribes of Israel (c. 2100-1700 B.C.). Jews, Christians and Moslems accord him the place in history as the first to worship the one true God. In the biblical account of his life, he is originally referred to as Abram (meaning "the father, or my father, is exalted") and is later named by God Abraham, traditionally taken to mean "father of a multitude of nations" from the passage in Gen. 17:5.

Since World War I archaeological finds at the third-millennium B.C. cities of Ebla and Mari revealed that a sophisticated literary and urban culture existed before and during Abraham's time. The Bible first depicts Abraham and his family as citizens of the great city of Ur of the Chaldees the flourishing cultural, political and economic center of the literate and technologically advanced Sumerian civilization. Sir Charles Leonard Woolley, head of a British American team of archaeologists that excavated Ur shortly after World War I, wrote, "We must revise considerably our ideas of the Hebrew patriarch when we learn that his earlier years were spent in such sophisticated surroundings; he was the citizen of a great city and inherited the traditions of an ancient and highly organized civilization."

The first century historian Josephus seems to indicate that Abraham was a man of noble birth and military might. Quoting earlier sources, Josephus wrote: "Abram reigned at Damascus, being a foreigner, who came with an army out of the land above Babylon, called the land of the Chaldeans. But after a long time he got him up, and removed from that country also with his people, and went into the land then called the land of Canaan, but now the land of Judaea."

In addition, archaeological evidence has shown that Canaan was not populated by semi-nomads but was a land of culturally advanced city kingdoms. The Book of Genesis portrays Abraham as a "mighty prince" in the land—a powerful chieftain who deals with kings, makes military alliances and negotiates land purchases. He loves peace, is skilled in war and magnanimous in victory. He embodies the ideals of justice, righteousness, integrity and hospitality, and is also described as a prophet and an intercessor before God. But, most importantly, Abraham is the prototype of the man who holds strong to his faith in the Lord's repeated promises that he will be a "father of many nations"—even when outer circumstances seem to indicate just the opposite.

Abraham, his father and his family left Ur to dwell some 600 miles away in Haran, a major commercial center in northwest Mesopotamia in the Fertile Crescent (where Syria now is). Although the Bible is silent on Abraham's early years, according to Jewish oral tradition he was fully engaged in a battle to win converts to monotheism and is said to have smashed the idols of his father, Terah, an idol maker who the Book of Joshua says "served other gods." 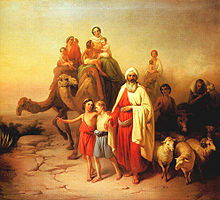 The Bible records that when Abraham was 75 and his father had died, the Lord called him to forsake all—his kindred and his father's house, the culture and cults of Mesopotamia—and journey to "a land that I will show thee." The Lord promised: "I will make of thee a great nation, and I will bless thee, and make thy name great; and thou shalt be a blessing." Abraham left Ur with his wife, Sarai, his nephew Lot, and "all their substance that they had gathered and the souls that they had gotten in Haran."

When they arrived in the land of Canaan, the Lord appeared to Abraham and again promised, "Unto thy seed will I give this land." When a severe famine struck the land, Abraham traveled south to Egypt. Afraid that the Egyptians would kill him because his wife was such a beautiful woman, Abraham represented Sarah as his sister and allowed the Pharaoh to take her into his household. As a result, the Lord plagued the Pharaoh and his house. When the Egyptian ruler learned the truth, he quickly sent Abraham and Sarah away with all the servants, cattle and riches Abraham had acquired in Egypt.

Once back in Canaan, the herdsmen of Lot and Abraham began to quarrel and the two kinsmen separated. Abraham generously offered first choice of the territory to Lot, who settled in the fertile plain of Jordan toward Sodom while Abraham dwelt in the seemingly less desirable land of Canaan in Hebron. After Lot departed, the Lord told Abraham that he would give the patriarch and his seed all the land that he could see. And although Abraham was still childless, the Lord affirmed that his seed would be as innumerable as "the dust of the earth."

Following this, Abraham—fully in the role of a military leader—armed 318 of his own "trained servants" and joined other chieftains in the land to defeat a powerful coalition of kings. Returning from this victory, Abraham was blessed by Melchizedek, king of Salem (Jerusalem) and priest of the most high God (El Elyon), who "brought forth bread and wine" and to whom Abraham gave a tithe (tenth) of the spoils. Abraham returned all the captives and goods that had been plundered to the King of Sodom and refused the king's offer to partake of the goods himself.

Once again the Lord appeared to Abraham and said, "I am thy shield and thy exceeding great reward," assuring him that his seed would be as innumerable as the stars. But Sarah, still barren after ten years in Canaan, proposed after the custom of the day that Abraham sire a child by her maid Hagar, who then bore Abraham a son, Ishmael.

Thirteen years later, when Abraham was 99 and Sarah 90, the Lord revealed himself to the patriarch as El Shaddai, "the Almighty God," and established an everlasting covenant with Abraham to be a God unto him and his seed. He promised to give Abraham and his descendants "all the land of Canaan.... Neither shall thy name any more be called Abram, but thy name shall be Abraham; for a father of many nations have I made thee." The Lord also changed Sarai's name to Sarah and told Abraham that she would be "a mother of nations; kings of people shall be of her." He revealed that Sarah would bear a son, Isaac, "at this set time in the next year" and that Isaac, not Ishmael, was to be Abraham's heir.

Then one day, as Abraham "sat in the tent door in the heat of the day" in the plains of Mamre, three "men" announced to him that Sarah would bear a son. Sarah, overhearing this, "laughed within herself" because she was past the childbearing age. And the Lord said unto Abraham, "Wherefore did Sarah laugh....Is any thing too hard for the Lord?" Following this, the Lord confided to Abraham his intention to destroy the wicked cities of Sodom and Gomorrah. Abraham, cast in the role of an intercessor, secured God's assurance that Sodom would be spared if but ten righteous men could be found therein. Although the city was ultimately destroyed, two angels warned Lot of the impending calamity and he escaped. 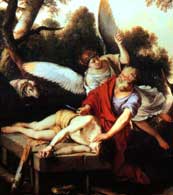 Finally, as the Lord had prophesied, Sarah "conceived and bare Abraham a son in his old age....And the child grew and was weaned: and Abraham made a great feast." Yet the supreme test of the patriarch's faith was still to come. God commanded him to sacrifice his only son and long awaited heir upon a mountain in the land of Moriah. At the end of a three days' journey, Abraham built an altar and laid Isaac upon the wood. As he raised his knife to slay the young boy, the angel of the Lord called out, "Lay not thine hand upon the lad, neither do thou any thing unto him: for now I know that thou fearest God, seeing thou hast not withheld thy son, thine only son from me." Abraham sacrificed a ram instead, and for the final time the Lord confirmed his covenant: "In blessing I will bless thee, and in multiplying I will multiply thy seed as the stars of the heaven, and as the sand which is upon the sea shore; and thy seed shall possess the gate of his enemies; and in thy seed shall all the nations of the earth be blessed; because thou hast obeyed my voice."

After Sarah passed on, Abraham sent his oldest servant to find a wife for Isaac from among his own people in Haran so that Isaac would not intermarry with the Canaanites and contaminate the seed of the people of God. The servant returned with a granddaughter of one of Abraham's brothers, Rebekah. Abraham himself took another wife, Keturah, who bore him six children. Although the patriarch provided for his other children, he "gave all that he had unto Isaac." Abraham died at the age of 175 and was buried beside Sarah in the cave of Machpelah (Cave of the Patriarchs).

Abraham's personal relationship with God and his exemplary faith earned him the title "Friend of God" in both Christian and Moslem scriptures (El Khalil in Arabic). He is, as the apostle Paul says in Romans, the father not only of the Jews, but "of all them that believe." The Moslems (who believe that the Arabs are descended from Abraham through Ishmael) revere the patriarch more than any other figure in the Bible. Inscribed on the Jaffa Gate in the Old City of Jerusalem is the passage from the Koran, "There is no God but Allah, and Abraham is beloved of Him."