Melchior, One of the Three Magi 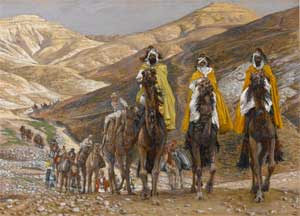 Adoring the will of God in the radiance of the Son of God, El Morya in his lifetime as Melchior perfected the science of heavenly bodies and the cycles of cosmic astrology. He followed with mathematical precision the star of the Presence of the Manchild born to the Virgin Mary, and he carried the precious gift of gold—the golden electrode of the Mind of God, that mind which was to be perfectly manifest in the universal consciousness of Christ Jesus; the gold of the King of Kings, the Prince of Peace; the gold of the teaching of the eternal Christos, the Son, that steps forth from the golden Sun of Righteousness; gold—the abundant life that he would restore to all, the offering of his Mother to her children.

In a dictation given April 16, 1976, El Morya described the experiences of several of his soul's early incarnations, perhaps on Mercury, which prepared him for his embodiment as Melchior:

"How many aeons ago did I become a chela of the will of God before I even knew the meaning of the word chela or the concept of the Guru. But God to me was the golden light of the dawn. And I sensed in the first rays of the dawn the will of a cosmic purpose, the will of a life and of a Creator beyond myself. And for a number of incarnations the focal point of my observation of the Deity was the morning light of the sun. And by and by through that contact—unbeknownst to me with Helios and Vesta—there was established an arc of flow over the arc of my own attention, and I began to feel the response of my own God flame within to the God of very gods in that Sun behind the sun.

"The observation of this attunement with Life continued for several more embodiments until I was not able to even begin a day of my life without this contact and this flow of energy—a literal infusion of my consciousness with ideas, with the understanding of the work that I should do. Almost, as it were, at subconscious levels I would move into and out of the sun as my point of contact.

"And so it came to pass as my devotions increased and the concentration of energies increased within my chakras, that after succeeding embodiments I contacted a teacher of the ancient science of astrology. It was the science of the study of heavenly bodies and their influences upon the evolutions in time and space. And that teacher gave me insight into the energy in the contact that I had made with the very core of creation. And so it was by will, not my own yet which I made my own, that the contact with life was established, that it grew and expanded, and the light of Helios and Vesta that glowed within my heart became a magnet, a magnet of the pursuit of God through the application of science.

"I have always then followed the path of science whether on Mercury or on Earth or other planetary homes of this system and other systems of worlds. The Lord God has permitted me to understand the law of the heavenly bodies and the earthly bodies and of the flow of energies in time and space. And I have found myself becoming one with the cycles of Matter before going to the outside of Matter.