Sir Thomas More, celebrated today as "a man for all seasons," was born in 1478 in the heart of London. His father, a prominent lawyer and judge, provided him with an excellent education. At eighteen, he left Oxford with a thorough knowledge of the classics and devoted himself to the study of law.

Young Thomas was already a close friend of the eminent Dutch humanist Erasmus and was growing in favor with King Henry VIII, who employed him in missions abroad. Also pursuing his literary interests, More was acclaimed as the first writer of elegance in English prose for his Life of Richard III, a precise historical document which Shakespeare followed in literal detail.

More's deep devotion to God caused him at one time to consider a religious vocation and to practice extraordinary austerities for over four years to test his own self discipline. He decided to marry, however, and his wife and four children proved to be his greatest joy and his sole comfort in days to come.

Their famed estate at Chelsea housed Thomas' entire family, including eleven grandchildren. Over the years, More's "little Utopia," as he often called it, became a center of learning and culture, likened by Erasmus to "Plato's academie"—a home of good will to which came the most learned men of the day, even the king himself, for counsel and for comfort. At Chelsea, More wrote the famous work entitled Utopia, a witty exposé of the superficiality of English life and the flagrant vices of English law.

More took a serious interest in the education of women, an attitude that was highly unusual at the time. Believing women to be just as capable of academic accomplishment as men, More insisted upon giving his daughters the same classical education given to his son. 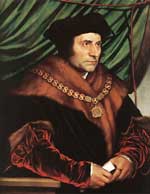 In 1529, Sir Thomas More was appointed by Henry VIII Lord Chancellor of England. Of him Erasmus wrote: "In serious matters no man's advice is more prized, while if the king wishes to recreate himself, no man's conversation is gayer. Often there are deep and intricate matters that demand a grave and prudent judge. More unravels them in such a way that he satisfies both sides."

In spite of many honors and achievements, More sought no man's esteem. He remained sensitive to the needs of the common people by daily walking the back streets of London to inquire into the lives of the poor. And even as Lord Chancellor, it was his daily custom to enter the court of judges at Westminster Hall where his father sat, to kneel, and to ask his blessing.

Sir Thomas devoted himself to his duties with utmost zeal until Henry, desirous of but lacking a male heir to the throne, declared his marriage to Catherine of Aragon null and announced his intent to marry Ann Boleyn. Since the divorce was without papal approval and directly opposed to the laws of the Church, More refused to support the king's decision. He resigned his office and retired to Chelsea, where, greatly concerned with the heresies of Luther's revolt, he continued his writings in defense of the Catholic faith. Without friends and without office, More and his family lived in abject poverty. Nevertheless, Henry had been insulted at the chancellor's public disapproval of him. The king, therefore, sought to defame More and thus restore his royal image.

When Sir Thomas clearly refused to give the oath of supremacy to Henry as head of the new Church of England, he was imprisoned in the dread Tower of London. Badgered by king's lawyers, More staunchly refused to compromise the position of the Church but diplomatically avoided direct accusation of the king, thereby saving his life and remaining a testimony to Henry's sinful injustice.

Finally, however, jealous enemies were encouraged by Henry to lie against him in the chancellor's own court at Westminster. Charged and convicted of high treason, Thomas More was beheaded on Tower Hill in 1535. Kneeling before the executioner, he said, "I die the king's loyal subject but God's first." Sir Thomas More was canonized a saint in 1935. The motion picture based on the play by Robert Bolt, A Man For All Seasons, is the story of the life of Sir Thomas More.