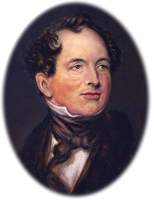 Thomas Moore, born in Dublin in 1779, was a prolific writer of both prose and poetry, gracing the land of Erin with his tender love for God and man. He graduated from Trinity College in 1799 and moved to London. As an impressionable young man with a "quick Irish temper," the execution of a close college friend during the United Irishmen's Rebellion aroused in Moore a patriotic fervor that provided his greatest literary inspiration.

His direct style and youthful attitude made him useful to the British liberalist cause as a witty satirist. His poems served as the controversial political cartoon of the day. Thomas Moore's greatest works included a brilliant biographical masterpiece taken from the confidential memoirs of Lord Byron. His own Memoirs, Journal, and Correspondence are an invaluable social record of life in England and Ireland during the first half of the nineteenth century.

Although he spent most of his life in England, Moore became known and loved as the national lyricist of Ireland through his Irish Melodies—a collection of verses written to the tunes of old Irish folk songs. One of these romantic ballads is Believe Me, If All Those Endearing Young Charms, which to the present day draws the power of his intense love for the will of God.

Believe me, if all those endearing young charms,
Which I gaze on so fondly to day,
Were to change by to morrow, and fleet in my arms,
Like fairy gifts, fading away,—
Thou wouldst still be ador'd as this moment thou art,
Let thy loveliness fade as it will;
And around the dear ruin each wish of my heart
Would entwine itself verdantly still!
It is not while beauty and youth are thine own,
And thy cheeks unprofan'd by a tear,
That the fervour and faith of a soul can be known,
To which time will but make thee more dear!
No, the heart that has truly lov'd never forgets,
But as truly loves on to the close,
As the sun flower turns on her god, when he sets,
The same look which she turn'd when he rose.