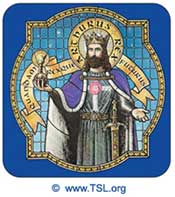 Into the midst of a war-torn and superstitious people, El Morya came as a mighty conqueror, King Arthur. Indeed, the Arthurian age is the starting point of British history. Upon his tomb in the cathedral at Glastonbury the epitaph reads: "Hic jacet Arthurus rex quandam rexque futurus"—Here lies Arthur, the king that was and the king to be.

The exact dates of the life of Arthur are unknown, although his story is recorded in both history and legend throughout western Europe. He first appeared in the sixth century when King Uther Pendragon died without an heir to the throne. The vicious power struggle which ensued could only be resolved by Merlin, the alchemist. In the churchyard of the Cathedral of London he caused the miraculous appearance of a large, foursquare stone with a steel anvil upon it and a sword thrust into the anvil. On the stone, the inscription: "Whosoever pulleth this sword from this stone and anvil is rightwise born king of all England."

The trial of the sword represents the power of the soul that is free from the bondage of attachment to things material, symbolized by the stone and anvil. It is an illustration of the divine right of kings—he who has the greatest attainment of the Christ consciousness has the right to rule. Knights and warriors, kings and noblemen gathered from throughout the western world, but Arthur alone, a lad of twelve, could free the sacred sword. He was crowned King of England by the Bishop of Canterbury.

At Camelot, King Arthur called together men and women of the highest attainment from throughout the realm and formed the Order of the Knights of the Round Table. Their raison d'étre: the quest for the Holy Grail, the defense of the Mother principle, eternal brotherhood under the Eternal Father, the restoration of Christ's kingdom on earth, the protection of the flame of the Holy Spirit in the community of Arthur's court and its extension throughout Britain, and the ennoblement of the soul through devotion to the Christ in individualized community action.

The knights of the Round Table and the ladies of the court at Camelot were initiates of a mystery school of the Great White Brotherhood. In the tradition of the Pythagorean school at Crotona, the Essene community at Qumran, the mandala of Christ and his apostles, as well as the guilds of medieval Europe that would succeed them, the knights and ladies guarded the inner truths of the Brotherhood revealed to them by Saint Germain, who was embodied as the beloved Merlin, the court magician and counselor to the king. The jousting and competition of the knights in their tournaments was the measuring of levels of inner soul attainment.

The devotion of King Arthur and Queen Guenevere in their soul relationship of guru and chela was the focus of the flame of the Father Mother God in the center of the court. The coming of Launcelot du Lac, also a chela of Arthur, to the Order of the Knights of the Round Table was the drawing together of the three persons of the Trinity, the threefold flame in the heart of Camelot. The soul relationship of Launcelot and Guenevere was that of twin flames. Together Arthur, Guenevere, and Launcelot laid the foundation of the Christian/Piscean dispensation for the English speaking peoples.

Arthur led his knights in the quest for the Holy Grail, the cup from which Jesus drank at the Last Supper. After Jesus' ascension, the Grail cup was deposited in a well at Glastonbury by a group of disciples who journeyed by boat with Mary the Mother and Joseph of Arimathea from the Holy Land to establish shrines on the European continent and in the British Isles for the expansion of western Christendom during the next two thousand year cycle. 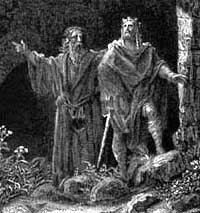 Thus El Morya, anointed by God (through Merlin, the reincarnated Prophet Samuel, anointer of kings and prophets of Israel), attuned with the Grail focus and by his noble ideals and spiritual genius, built the platform for the dissemination of the Christic light throughout the globe wherever the British went forth by its impetus to discover and settle new worlds. The inner significance of the knight initiates of the brotherhood of the quest was seeking and finding the Christ consciousness through the law of self-disciplined service to life.

Among the knights of the Round Table, Sir Modred (said to have been Arthur's son sired prior to his marriage) harbored intense jealousy and hatred for the king. Knowing that the military strength of Arthur was unsurpassed, he contacted the sorceress, Morgana le Fay, and together Modred and Morgana used the subtle entrapments of witchcraft, treachery, and intrigue to destroy the sacred trust of king, queen, and knights of the Round Table.

In a war that resulted from the denial of a Roman demand for tribute, Arthur would have conquered Rome itself and the entire empire if he had not been called back to England where Modred had usurped the throne and imprisoned Queen Guenevere in the Tower of London. In the fierce Battle of Camlam that followed, Arthur slew Modred but was mortally wounded. It is said that as Arthur lay dying on the battlefield, he sighted a young boy and in him beheld the hope of the future. The king knighted the lad and bequeathed to him the precious vision of Camelot come again. Then, as the story goes, Arthur was placed on a barge with three mysterious queens and taken to the island valley of Avalon, as Tennyson wrote,

Where falls not hail, or rain, or any snow, Nor ever wind blows loudly; but it lies Deep meadow'd, happy, fair with orchard lawns And bowery hollows crown'd with summer sea, Where I will heal me of my grievous wound.

El Morya's dream to free the earth is far more than this brief span of knighthood. In this age, Arthur is ascended, holding the balance for his chelas, the twin flames Launcelot and Guenevere who reembodied as Mark and Elizabeth Prophet, whom he commissioned to reestablish the mystery school Camelot in that island valley of Avalon—the Promised Land of the Woman clothed with the Sun (the Universal Mother) and the Divine Manchild she bears (the Christ consciousness quickened in the children of God on earth).

On New Year's Eve, 1976, El Morya recalled the days of Camelot. He said: "Really, no time or space has passed in this joy of the return—all is as it was then, the return to the white flame, and before us the vision of the Grail that we must carry into the new world and into the new age."